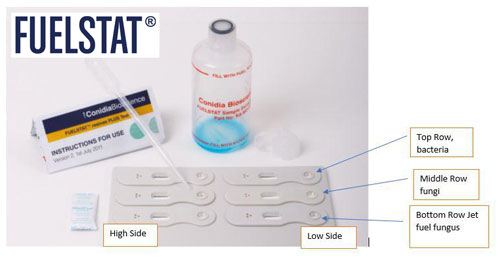 Safety comes first. After a mishap, the NTSB always talks to the pilot first. Are you exercising “due diligence” in fuel quality management? How good is your pre-flight? Is microbial slime choking your fuel system or storage tank?

An ounce of prevention is worth a ton of cure!

Check your Jet Fuel, Diesel, or Gasoline storage tanks, in the ground, above ground or in your aircraft tanks with the FUELSTAT® bio test kit. Tests for Fungi, Bacteria and Jet Fuel Fungus, all at the same time in the same kit.

FAST! Accurate! Easy! Ground crew can do it in ten minutes!

Simple to do but extremely sophisticated. Six simultaneous tests in one kit.
Patented around the world.
Store the kit at room temperature (below 86 deg F) for up to two years.
Perfect for Central and Remote fuel storage locations to maintain fuel quality.

A flow chart for action in the event of detection of contamination is available. Dispose of a used kit in the garbage, no special precautions necessary.

Very high-level scientific wizardry makes it simple to do but extremely sophisticated. Approved by the ASTM, specification ASTM D8070-16. Patented around the world. Does not deteriorate, store the kit at room temperature for up to two years. No shipping of a sample and waiting a week, you do it right in front of you.

Your cart is empty
Visit The Shop

Our products are better because they are of high quality, proven in aviation use. Nobody else can claim that. We make fuel additives, windshield wash and microfiber cloths.